I will admit that for a long time I looked down my nose at romance novels because they’re so cliché and so unrealistic! Well, I have come to the conclusion that unrealistic is okay and also the point! Many of us read to escape reality so why not escape into something that seems unrealistic? It makes it all the more exciting. We get enough reality on the daily news and most of it can be rather depressing, so why not escape reality when offered the chance!

This past week I have had the privilege of reading two new romance novels by two different authors, one established and one up-and-coming. I was surprised at how much I enjoyed both of these novels, and I hope if you’ve “given up” on romance novels like I had that you consider picking up one or both of these. One felt more like a sweet romance while the other was rather steamy, but both of them kept me turning the pages! 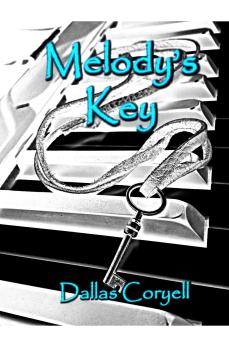 I love discovering new authors, and Dallas Coryell is one to watch! I started reading Melody’s Key one night and couldn’t put it down. I got totally caught up in Tegan’s story of life with her family, helping take care of their old manor house in England which doubles as a hotel to host guests all summer long. When American rock star, Mason Keane, shows up on the scene for some R&R, they don’t hit it off. It’s the relationship that develops over the next few months that kept me turning the pages and dying to find out what was going to happen.

This was a refreshing, contemporary romance complete with modern lingo, texting, and funny chapter titles such as “VHS and Chill,” a clever play on the popular “Netflix and Chill.” This book was filled with romance, a little mystery, and plenty of surprises. One of my favorite things about this modern story was the older love story that was nestled inside the contemporary one. We get glimpses early on of a forbidden love that took place during WWI told through the letters that survived the lovers, which sets a romantic tone for the book. The hopeless romantic in me wished there were more to that story and is hoping for a prequel that tells the love story of Violet and her secret lover.

This book was well written with excellent supporting characters that were believable in their roles as bratty siblings, loving family, and good friends. Both teenagers and adults would enjoy this read. If you enjoy novels by Nicholas Sparks, I highly recommend that you check out Melody’s Key, available now on Amazon.

One of my favorite passages from this book: “She groaned melodramatically and burrowed her face deep into the blankets. Flopping her arms out to the sides, she felt her right hand strike something solid. Without having to look she already knew it was her guitar; lying beside her like a still sleeping lover amongst scattered pages from her latest 2am songwriting session.” – Melody’s Key

I received an advance copy of this book from St. Martin’s Press through NetGalley, and I will admit that I was surprised at how much I enjoyed it. I found myself engrossed in the story right away for two reasons: 1) Suspense and intrigue. I had to know what was going to happen! It is a classic tale of sibling rivalry except in this case, the rivalry is between two very sexy brothers, Shane and Derek, who are fighting over their family empire and their rivalry can turn deadly in a heartbeat. 2) It’s steamy! Amidst the struggle for control of the family empire is Emily, sweet but not so innocent and hiding secrets of her own. When Shane and Emily have a chance encounter, the sparks don’t just fly, they explode and don’t stop until a cliff hanger ending that leaves the reader begging for the next installment in this new series.

One of the reasons I found this book readable was that the writing was good, especially the dialogue. Often when I’ve tried to read romance in the past, the dialogue has been an area of struggle for me because it’s too unbelievable and/or too cheesy. The characters were also well-developed. While they might seem cliché at first – the tall, dark, and handsome man and the beautiful wide-eyed innocent woman – you will quickly learn that these characters have more depth and emotion to them, which is what made this book not only tolerable but actually enjoyable.

One of my favorite lines from this book: “The woman is a jewel in a sea of stones.” – Hard Rules

4 thoughts on “New Reviews in Romance”