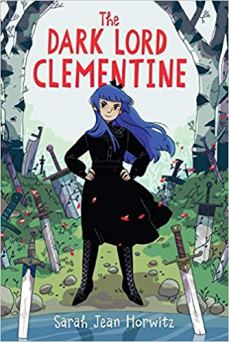 Well it’s officially October and time for all things spooky and magical! I started my month off with a new book from Algonquin Young Readers, The Dark Lord Clementine by Sarah Jean Horwitz. As the cover art and title suggest, this is a fantasy book for young readers filled with magic and adventure with a storybook feel to it. It is a great pick if your kiddos want something to suit the season or for any kids who enjoy adventure stories. Additionally, this book features a strong female lead with strong female supporting characters. Definitely a plus in my book, as I feel that adventure stories still tend to lean toward male protagonists. But not in this book. This book is all about Lady Clementine, daughter to the Dark Lord Elithor and heir to Castle Brack, where hundreds of years of Dark Lords have ruled before her. But…what if Clementine doesn’t want to be a Dark Lord? What if she doesn’t want to be a Dark anything?

The Dark Lord Clementine was an original take on a familiar story – someone struggling with the role they’ve been given in life. Clementine is initially determined to be a great (that is, terrible!) Dark Lord like her father. Once her father becomes cursed by a witch, it’s up to Clementine to save him, their family home, and reputation. But while trying to save her father, Clementine makes some new friends, learns about herself, and discovers she just might lean toward the light after all.

This story was very creative. The characters were original while still paying homage to some beloved children’s stories and famous literary characters. I picked up on references to The Secret Garden, The Snow Queen, Snow White, King Arthur, The Lady of the Lake, and Jack and the Beanstalk to name a few.

There is a lot of humor in this book. Each chapter starts with a title and is then followed by an alternative title that will tickle young readers’ funny bones. There was also a ton of fun wordplay throughout the book. For example, the nightmares, which were small horses destined to produce terrifying dreams, and the Witchionary, a giant book filled with – you guessed it – information all about witches. There was also a black sheep, fire-breathing hens, and animated scarecrows. This book is fantasy to the max!

The overall lesson in the book is a positive one – being true to yourself, even if it doesn’t align with others’ plans for your life. There are lessons in friendship and betrayal as well as sacrificing yourself for the greater good. Clementine is a strong female lead, bravely and boldly caring for her father and trying to do right by him while also learning to be true to herself. All in all, it’s an entertaining story perfect for fans of The Girl Who Drank the Moon by Kelly Barnhill.

I received an advance reader copy from Algonquin Young Readers. All opinions are my own.