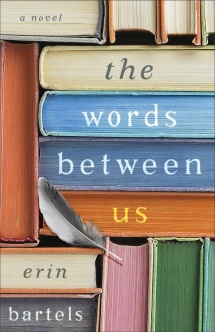 I really enjoyed this book. It was fast-paced and exciting with tension, drama, romance, and surprise twists. I got really caught up in both timelines. The alternating timelines made me feel like I was switching between a YA novel and an adult fiction novel, which is a testament to Ms. Bartels’s excellent writing skills. She really captured both the youthful voice of teenage Robin and the tired, somewhat defeated voice of adult Robin.

I also loved that the Christian message in the book is subtle. Too often with Christian fiction, the message is too overt and the characters have a sudden revelation and life-changing spiritual experience or encounter and suddenly find everything “fixed” so to speak. But that doesn’t feel very realistic. Faith plays a role in The Words Between Us, but it is subtly woven into the story, with a character mentioning she will pray for Robin or through a character who has been devoted to the Church her whole life. Very little of the story is directly associated with faith, church, or Christianity, though the underlying message of faith and hope shines through.

All of the characters, main and supporting, were very well-written. Robin and Peter were incredible characters, but I also loved the supporting train-wreck-of-a-best-friend Sarah and the grumpy yet lovable parrot, The Professor.

After reading this book and knowing everything I know, I want to re-read it and truly experience it from Robin’s point of view: reading the “now” with knowledge of the “then.” I also absolutely love the nod to literature throughout the story: classic novels and writers like The Catcher in the Rye, A Separate Peace, and Emily Dickinson to name a few. Books become Robin’s salvation in a way, keeping her sane, giving her someone to relate to, even if it’s just a character written in black and white. I loved that because I, too, can relate to turning to books for comfort during difficult times in my life.

All in all, I would give this book 5 out of 5 stars. I simply loved it. I think fans of contemporary fiction, Christian fiction, and YA would all appreciate this book as well as bibliophiles like myself since books play such an integral role in this story.

I received a review copy from Revell Reads. All opinions are my own.