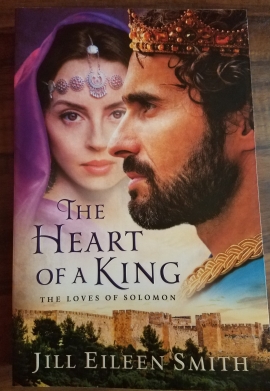 One of the incredible things about being a book blogger is getting to read new and upcoming books. I enjoy books of all genres, including historical fiction. Today I’ll be reviewing a new book from Revell Reads, The Heart of a King, which takes place during the time of Solomon’s life in the Old Testament. This is a stand-alone novel that focuses on the relationships of Solomon, the son of King David. Solomon was a wise man, granted wisdom by God. Even if you haven’t read the Old Testament, you’ve likely heard some of the stories about Solomon, such as the two women fighting over an infant. It was Solomon’s wisdom in cases like this which made hundreds of people line up on a regular basis to seek Solomon’s wisdom on various issues. But for all his wisdom, Solomon struggled to make wise choices in his own life, particularly involving his relationships.

Solomon is believed to have authored multiple books in the Old Testament, including Proverbs, Ecclesiastes, and Song of Songs (or Song of Solomon). These poetic writings are woven throughout the text of this book, giving the reader insight into what specific events and relationships were taking place in Solomon’s life when he wrote these works.

Solomon is well-known for his wisdom but also his lack thereof in taking such an excessive number of wives and concubines. This book deals with these relationships, specifically Solomon’s relationships with four of his wives: Naamah, a childhood friend of Solomon’s; Abishag, a poor country girl; Siti, the daughter of an Egyptian pharaoh; and Nicaula, the Queen of Sheba.

Overall, this was a fun read that made key people in the Old Testament seem real and relatable. I love strongly written fiction that makes Biblical stories come to life. The dedication of King David to God was truly touching. I also greatly enjoyed the way the book is broken up. It is like reading four short novels – one for each of Solomon’s four wives given attention in this book. We learn their backgrounds, their personalities, and how they connected with Solomon. While political gain was a strong motivator for Solomon in taking so many wives, I got the impression that his feelings for these four women were real.

I do think it would be helpful to have a basic understanding of who King David was and his relationship with Bathsheba. Their relationship is important to the story and their past is referenced multiple times throughout the book. It would be helpful to give the Old Testament story about these two a read prior to starting this book. It can be found in 2 Samuel chapter 11. I would recommend The Heart of a King to those who enjoy historical fiction and biblical fiction.

I received a complimentary copy of this book from Revell Reads. All opinions are my own.

2 thoughts on “Book Review: The Heart of a King: The Loves of Solomon by Jill Eileen Smith”