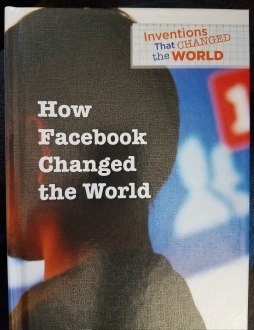 What a month! What a couple of months actually! I have been very busy with work over the last six weeks or so – but that’s a great thing! I love being a writer and working on articles and new book projects.

I have been fortunate enough in my writing career to become a published author. I have written several nonfiction educational books for children and teens, and just recently finished working on a couple of new ones that will be out in 2020.

In January, I had a new book release as part of a middle grade series called Inventions That Changed the World. I wrote about Facebook. There’s no denying that social media, and Facebook in particular, has had a huge impact on our world. That’s what I dive into in my latest book, How Facebook Changed the World.

Now I don’t know about you, but I personally grew up before the internet and social media. I remember when everyone was trying to figure out what the internet was and what on earth we could need it or use it for. And I remember later trying to figure out what social media was and why on earth I would want to be updated on what my friends were eating for lunch and other daily activities.

Well, as it turns out, people had a desire to be connected all the time. That desire has fueled the popularity of instant messaging, texting, and social media. Social media has changed so much about our world. Facebook has changed how we speak, how we act, how we view our lives and the lives of others. It has contributed to things like social media addiction and the fear of missing out (FOMO) that drives many people to constantly check their phones, whether or not they even realize they’re doing it. It has also led to an increase in charitable contributions, organ donor registrations, and has helped reunite friends and family.

So how exactly did Facebook become the social media giant and great influencer that it is? Read about life before Facebook, the history of Facebook, the effects of Facebook, and the future of Facebook in How Facebook Changed the World. This book is designed for educational environments such as libraries and classrooms. Other titles in the series include:

How Electricity Changed the World

How the Internet Changed the World

How the Printing Press Changed the World

How the Steam Engine Changed the World

If you are an educator interested in buying these books for your classroom or school, visit the Cavendish Square website to learn more.