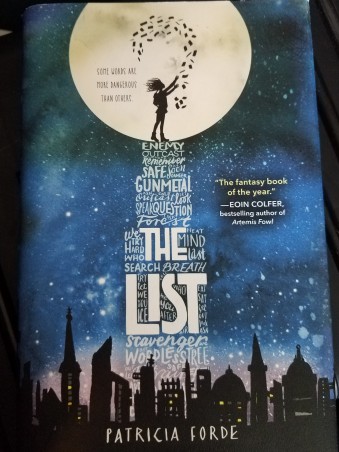 The List has been on my radar for a few weeks now. I heard about it over the summer and included it in my list of Children’s and Middle Grade Reads for Fall. While I am not usually a fan of dystopian literature, this book was intriguing. It takes place after a great war of bright bombs (presumably a nuclear war) and after the Melting, in which Earth is devoured by water. Earth has been destroyed and what little remains livable has been inhabited by survivors desperate for water, food, and shelter.

Letta lives in the survivor’s community of Ark, run by the intimidating John Noa. Noa forces everyone to speak a special new language called List. It is a language made up of only 500 approved words, words that are necessary for communication and survival. Any words that might put ideas into people’s heads, like artist or music or creativity, have been banished.

I found this story to be, at its core, about the dangers of censorship. Forde not only sends this message through the language of List and what happens to those who dare to use banished, or censored, words but also through the lessons of the past that were not learned. More than once in the story, scientists from “before” are mentioned. These scientists were ignored. Their words were covered up, or censored, by money and power. The Earth, and everyone living on it, suffered when the scientific predictions came true and the Earth was destroyed.

There are very clear messages of the dangers of ignoring scientists and global warming in this book, specifically what may be waiting down the road for humankind if they are ignored. There was also a clear religious undertone with references to another great flood, John Noa, and the city of Ark. I’m not sure what message Forde was trying to convey with this. Perhaps she was simply drawing a parallel between the old story of Noah and the flood with what happened in the book. The religious aspect of her story wasn’t clear to me, but the censorship aspect was.

I found this book to be a thought-provoking read. I would caution parents who are considering this for younger children, though, as the book does include some violence, including the murder of a pregnant woman. I wouldn’t recommend it for younger than age 13, and I think the censorship message would go over the heads of younger kids anyway.