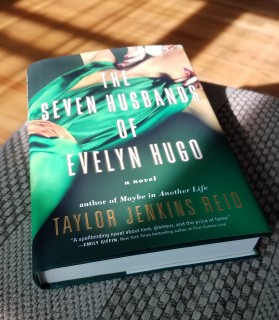 A couple of weeks ago, The Seven Husbands of Evelyn Hugo started popping up all over my Instagram feed, and I became intrigued. The title alone is enough to pique one’s interest. At the bookstore last Friday, I came across this title and decided to see what all the fuss was about. After reading the synopsis, I was sold. I had to read this book!

Evelyn’s story takes place over several decades and falls into one of my favorite genres of books – the golden age of Hollywood. I love reading stories set in Hollywood from the ‘40s – ‘60s. I love watching old films and imagining what life was like for the movie stars who made them. I have read several celebrity autobiographies from that era, and they are always fascinating to me. Although Evelyn Hugo is a fictional character, I couldn’t wait to read her story.

One of the things I loved about this book was that it just kept surprising me. It was reminiscent of a book I read years ago by Nora Roberts called Genuine Lies, in which a famous Hollywood starlet decided to tell her story later in life. She hired a biographer and told her story with an air of mystery only to reveal a bombshell surprise at the end. This was basically the same plot, however, Evelyn’s story was unique and she was quite an original character.

It is difficult to write about this book without giving away any spoilers. I want others to read this book and be just as surprised as I was when secret after secret is revealed, and with seven marriages against a scandalous Hollywood backdrop, there were plenty of secrets! I will say that this story tackles real issues of our time and the struggle of those who are just as human as the rest of us being forced to lie about themselves and hide who they really are.

There was a good twist to the ending of the story, although I had my suspicions about halfway through the book so it wasn’t a shocker. But still a good twist nonetheless.

I found myself immersed in Evelyn’s world, and I didn’t want to leave. I have not read any other books by Taylor Jenkins Reid, but if they are anything at all like this one, they will surely be going on my TBR list.

One of my favorite quotes from the book:

“He told me he wanted to do work that invigorated him. He said, ‘You have to do that, too, Monique. When you’re older. You have to find a job that makes your heart feel big instead of one that makes it feel small.’” – The Seven Husbands of Evelyn Hugo