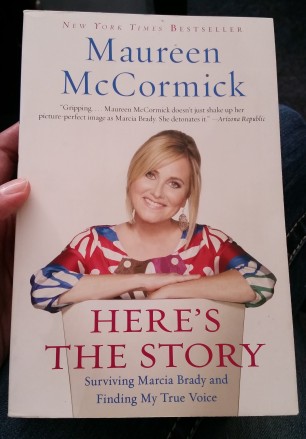 Here’s the Story, of a Lovely Lady…

…and her name is Maureen.  Now if we happened to pass Maureen on the street, we would probably light up with recognition, wave or say hello, maybe say something like, “It’s Marcia, Marcia, Marcia” (because we’re all really original like that), and go home to tell our friends that we passed Marcia Brady on the street today. Except we didn’t pass Marcia, we passed Maureen.

I’ve long been a fan of celebrity memoirs as I find it fascinating to learn about what really went on behind the scenes on TV shows and movie sets. While The Brady Bunch was before my time, I, like millions out there, caught the re-runs over the years and am very familiar with Mike and Carol Brady and their merged family. The Bradys’ lives were simple, and every episode featured a problem that could be solved in less than 30 minutes. Marcia was the eldest daughter, and the American Dream Girl.

I thought her story sounded interesting, and it turns out that that is putting it mildly! Maureen didn’t have Mike and Carol Brady as parents. She didn’t have three brothers, two sisters, a housekeeper named Alice, and a dog named Tiger.  Maureen’s problems couldn’t be solved in thirty minutes. Maureen had parents, but they were far from the picturesque couple Mike and Carol Brady made. Maureen had dark, hidden family secrets she was held captive to much of her life. Maureen was a far cry from her alter-ego, Marcia. Marcia was perfect. Maureen was human.

In her memoir, Here’s the Story: Surviving Marcia Brady and Finding My True Voice, Maureen takes us behind the classic TV show. She opens up for the first time about her family history, a history she waited so long to tell because her mother had begged her not to.  She opens up about her parents’ marriage, which it turns out is nothing like the Mike and Carol Brady we’ve welcomed into our homes for more than forty years now. She opens up about her mentally challenged brother, another brother’s drug problems and personal struggles, and her real relationships with her famous Brady co-stars.

I found myself just amazed at Maureen’s story while reading this book. Not only is her life the farthest thing from Marcia’s, but Maureen’s desire and ability to share her life, her struggles, and her strength in surviving it all, is truly amazing to me.  I thoroughly enjoyed this book and would recommend it to anyone who was ever a Brady fan, anyone who has ever struggled with addiction, and anyone who wants to learn about an amazingly strong woman.

For similar reads I would also recommend: Unsweetined by Jodie Sweetin; Little Girl Lost by Drew Barrymore; and Drinking: A Love Story by Caroline Knapp.