I’m not sure why but I tend to gravitate toward middle grade and young adult reads during the summer. Maybe it’s because summer will forever remind me of summer vacation and feeling young and free for two and half months. Maybe my adult self is subconsciously trying to recapture that feeling. Whatever the reason, I love diving into MG and YA books during summer, especially ones with a beach or vacation theme.

July might as well be Leila Howland month on my blog. I reviewed her book Hello, Sunshine in July 2017 and just reviewed her first two Tangled novels a couple of weeks ago. Howland writes for young readers extremely well. She doesn’t try to make her writing sound like it’s for young readers. Instead, she writes with an authentic voice, usually in first person, putting the reader right into the shoes of a seventeen or eighteen year old and all the butterflies, hormones, questions, and excitement that come with being young.

I decided to try another round of Howland’s books, this time a young adult novel, Nantucket Blue, about a teenage girl who spends the summer working on Nantucket Island, followed by the sequel Nantucket Red. 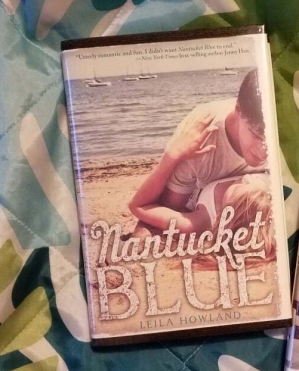 For me, Nantucket Blue beautifully captured the innocence, hurt, and emotional turmoil that come with being young. Cricket Thompson is the protagonist who, after a sudden and terrible tragedy, finds herself working on Nantucket Island the summer right before her senior year of high school.

Cricket deals with a lot of family issues. Her parents are recently divorced and her dad is remarried with a stepson. Cricket feels replaced and sad that her mom can’t seem to move on. While Cricket’s family plays a role in the book, the focus is really on Cricket and her best friend, Jules, who begins to push Cricket away without any explanation. This book had all things young adult – family drama, best friends, ex-best friends, backstabbing, crushes.

Cricket emerged as a pretty typical teenager then morphed into a strong female lead. When she gets knocked down with the unexpected, Cricket learns to pull herself up and keep going and to stand up for herself and fight for what she wants. I loved that. Cricket really learns about herself over the summer, and I think she’s a good role model for teenage girls.

All in all, Nantucket Blue is a coming of age YA novel with a beach setting about relationships and figuring out who you are and who you want to be. It was done well enough that I picked up the sequel to find out how Cricket’s story concludes. 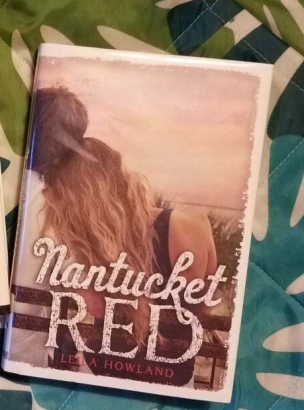 In Nantucket Red, Cricket Thompson is back to her normal life, with things seeming to have calmed down from all the summer turmoil and drama. She is finishing her senior year of high school and looking forward to attending an Ivy League school in the fall. The last thing she expected was to return to Nantucket Island the summer following her high school graduation. But, as fate would have it, that’s exactly where she ends up.

Cricket returns to the island, where she revisits some old friends as well as makes some new ones, including a hot new bartender at the club where she scores a waitress job. Once again, jealousy and rivalry come into play and emotions run high, as they tend to do when you’re seventeen or eighteen and everything feels like it’s the beginning or end of the world.

Cricket faces new challenges over this summer and, once again, has a bit of a journey of self-discovery. She finally lets her guard down a little and decides to sow some wild oats, so to speak. But she also has to learn to live with the repercussions of her actions and to take responsibility for herself.

In Nantucket Red, Cricket finds herself going from teenager to young woman and learning about just what it means to be “grown up.”

I enjoyed both these books, and I felt Nantucket Red was a great follow-up to Nantucket Blue and a strong conclusion to Cricket’s story. I won’t give away any spoilers, but I really enjoyed the ending of the second book. I think things really came full circle for Cricket, and I found myself cheering for her and wishing her luck on her journey.

If you want to read both of these books, there is now a collection of the two in one volume called Nantucket Summer. I also want to note that these books are definitely in the young adult category and not middle grade. They contain some mature, young adult themes such as sex and drinking.