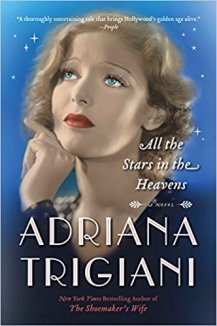 “The ocean rolled out before her like a bolt of black velvet, while the stars overhead were fixed like silver sequins. The night sky was so clear it seemed that Loretta could see all the stars in the heavens.”

My first novel of the summer took me back to the Golden Days of Hollywood. As I stated in my May wrap-up, I’ve been leaning toward “comfort reads” lately – familiar stories, characters, and settings. I love reading about old Hollywood, and All the Stars in the Heavens was just what the doctor ordered. I found this book delightful. Not only was it one of my favorite genres, but the story featured real-life movie stars including Loretta Young, Clark Gable, and Spencer Tracy.

All the Stars in the Heavens is a fictional story but it is based on a true story. Beloved actress Loretta Young met heartthrob Clark Gable in 1935 when they were both hired to work on the film The Call of the Wild. Uninterested in Gable due to his reputation for on-set love affairs, Loretta vows to keep her distance and focus on work. But rumors quickly start flying through Tinsel Town, leaving Loretta to defend her name and honor against the studio executives, fans, and most of all, Gable’s wife!

These characters were beautifully written and the descriptions of the movie sets, the Hollywood homes, the studios, and the vintage clothing made me feel immersed in 1930’s Hollywood. The story doesn’t take place just in the ‘30s but truly spans Loretta’s lifetime.

My favorite character was Alda Ducci. Alda enters Hollywood straight from the convent. Planning on becoming a nun, Alda is shocked when Mother Superior informs her that she is not cut out for the convent. Alda is asked to leave the convent and take a job as secretary to Loretta Young. At first, Hollywood life makes Alda’s head spin, but she quickly adapts, becoming the friend and confidante that Loretta desperately needs in the cutthroat world of money, fame, and power.

Like I said, I found this book delightful. There are multiple storylines woven throughout the book, not just the Loretta and Clark relationship. The story also takes place across the globe, not just in Hollywood. The characters venture to Seattle, Brooklyn, South Bend, and Italy. There were surprises, suspense, and, I felt, a satisfactory ending.

Now that I’ve read the fictional account of the Young/ Gable relationship, I’m interested to read Loretta Young’s biography and see how much of it overlaps with this story. Though I also hesitate to ruin the images and story that are now established in my mind. We shall see…

If you enjoy stories set in old Hollywood, romances, and stories about finding yourself, then you will likely enjoy All the Stars in the Heavens.

Up Next: My review of the first two books in Disney’s middle grade Tangled series by Leila Howland. Subscribe to the blog so you don’t miss out!

2 thoughts on “Book Review: All the Stars in the Heavens by Adriana Trigiani”

Officially one of my favorite unicorn books ever! The creative text book style teaches you everything you need to know about unicorns and even gives a certificate at the end, once you're officially an expert. Super cute with fun, vivid illustrations! . . . #bookstagram #bookblogger #book #books #booksofinstagram #booksofig #instabooks #read #kidlit #kidsbooks #childrensbooks #kidlitart #artistsofinstagram #unicorn #rainbow #creative #photooftheday #nofilter #illustration #illustrator #unicorns101
This was a boldly honest and refreshing read. Mat Best is a great storyteller, and while his sense of humor is a little raunchy at times, I highly recommend this book. It was recommended to me by my brother, who is currently in the service and who, like Best, considers it an honor to serve. Great read! . . . #bookstagram #bookblogger #book #books #booksofinstagram #booksofig #instabooks #bibliophile #read #reading #matbest #thankyouformyservice #thankyou #usa #america #freedom #service #vet
Go With the Flow is simply brilliant. Period. My full review is live on the blog (link in bio). @lwbean @01firstsecond . . . #bookstagram #bookblogger #book #books #booksofinstagram #booksofig #instabooks #bibliophile #ya #youngadult #graphicnovel #gowiththeflow
I have really developed an appreciation of graphic novels over the past year and hope to read several this year as part of my 50 in 2020 reading challenge. These two new graphic novels are simply phenomenal and have certainly set the bar high for all others I read this year. And New Kid recently became the first graphic novel to win the Newbery Medal! . . . #bookstagram #bookblogger #book #books #booksofinstagram #booksofig #instabooks #read #middlegrade #photooftheday #nofilter #newkid #thenewkid #gowiththeflow #graphicnovel #newberymedal #friendship #friend #diversity