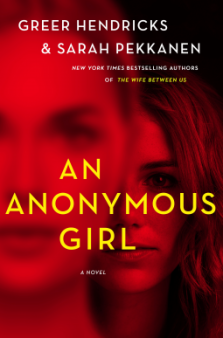 Earlier this year I read The Wife Between Us, a collaboration by Greer Hendricks and Sarah Pekkanen. That book had a twist that wowed me like few other books ever have. It was a great example of what psychological thrillers should be – unpredictable, unputdownable, and unforgettable! When I saw that this duo has a new book coming out in 2019, I jumped at the chance to read it. I was excited, yet a little skeptical. Could they really pull off another great psychological suspense thriller?

END_OF_DOCUMENT_TOKEN_TO_BE_REPLACED

“Gaze detection, it’s called – our ability to sense when someone is observing us. An entire system of the human brain is devoted to this genetic inheritance from our ancestors, who relied on the trait to avoid becoming an animal’s prey.” – The Wife Between Us

I was overdue for an unputdownable, exciting psychological thriller. Enter The Wife Between Us! I had heard of this book and decided to give it a shot. I was a little hesitant as I have read some “thrillers” over the last year that were anything but thrilling. But I was pleasantly surprised with this new release and finished it in less than a week.