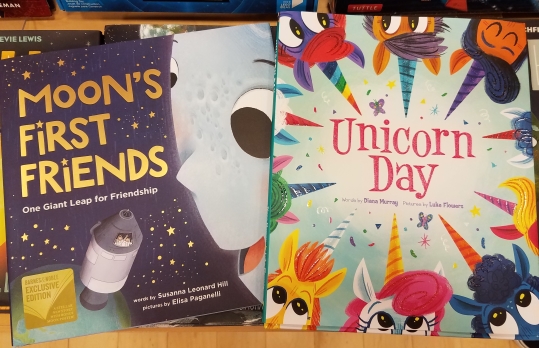 Today, I’ll be sharing reviews of two new picture book releases from Sourcebooks. One is about the Apollo 11 mission and is a great way to introduce kids to science and space. The other is a whimsical story of inclusion and acceptance featuring unicorns and rhyming words. 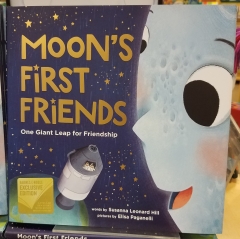 Moon’s First Friends from Sourcebooks Wonderland is a new picture book hitting the shelves just in time for the 50th anniversary of the moon landing next month. In Moon’s First Friends, kids learn about the moon and how lonely she is all by herself up in space. The Moon observes from the sky the earth’s many changes over the centuries – from dinosaurs and cave men to humans learning to ride, drive, and fly. But still, no one ventures into space to keep the moon company. Until July 20, 1969, that is, when American astronauts landed on the moon. I really enjoyed the journey through time that this book portrayed and the brief history of the earth, man on the earth, inventions, and the space program. At the end of the book is a detailed account of NASA’s efforts to send a man into space and some additional educational fun stuff. This is a fun, creative way to teach kids about the moon landing and would be a great addition to classrooms as well as for any kiddos who love space and science. 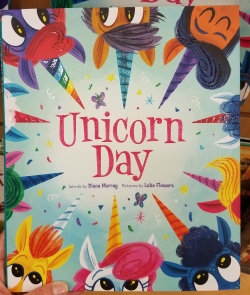 Unicorn Day is a new picture book from Sourcebooks Jabberwocky – Sourcebooks is on a roll as far as I’m concerned! First of all, let’s talk about this cover art! I know we’re not supposed to judge books by their covers. But in order to make a book stand out in the children’s section, it should be something that catches the eye and makes you go “Wow!” Well, Luke Flowers, an incredibly talented illustrator, accomplished that in spades with this book! I’m sure it’s hard to see the glittery sparkles in this picture, but trust me, the cover is filled with sparkles that twinkle as the light catches them.

Now for the content. Murray uses rhyme to tell a story about unicorns getting together for a fun day. There are three rules that must be obeyed including being proud of who you are, flaunting your fluffy unicorn hair, and having fun, overall a great set of rules for kids. Many adventures ensue but the party suddenly halts when a wannabe unicorn is found in their midst. Instead of calling out the un-unicorn, the party embraces him and shows him what it means to be a real friend. This story has a beautiful message of acceptance and inclusion. The illustrations will draw your attention, the fun rhyming text will hold it, and the heartwarming message will keep you coming back again and again. In short, I loved it!

More kid lit book reviews will be coming soon, including picture books and middle grade. Be sure to subscribe to the blog so you don’t miss out!